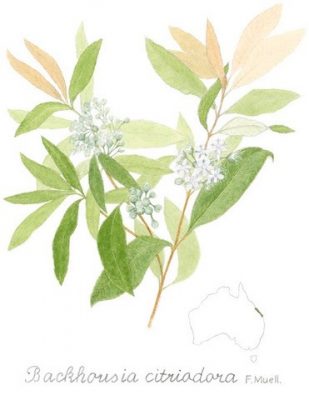 Lemon myrtle has been a popular bush herb for centuries

How is Lemon Myrtle Used?

Lemon myrtle is probably the the best known bush tucker herb and has been used as a remedy for coughs and colds, a food flavouring, an essential oil for the cosmetic industry and an insect repellent.

THE ABORIGINAL PEOPLE HAVE USED THE LEAVES OF THE LEMON MYRTLE TREE FOR CENTURIES AS A BUSH MEDICINE, THEY ALSO REALIZED THAT THE LEAVES GAVE THEIR FOOD A UNIQUE FLAVOUR.

The Australian herb, Lemon Myrtle, has been used for coughs, colds, stomach upsets and in some cases applied topically for skin problems.

The leaves of the Lemon Myrtle tree would be soaked in water and then put over a fire, the vapour from the leaves would then be inhaled.

It was named Backhousia citriodora by Ferdinand von Mueller, with the genus named after his friend James Backhouse who was a botanist and also quaker missionary.

IN THE EARLY 1900’S IT WAS DISTILLED ON A COMMERCIAL BASIS AT EUMUNDI, A SMALL TOWN ON QUEENSLAND’S SUNSHINE COAST AND THE ANTIMICROBIAL QUALITIES OF THE DISTILLED STEAM WAS DISCOVERED IN 1920 BY PENFOLD AND GRANT IN SYDNEY.

In the late 1980’s Backhousia citriodora was harvested as a commercial crop after it was discovered that it could be extremely useful as a culinary herb.

By the 1990’s Lemon myrtle was starting to get a name and reputation with some of the restaurants and food manufacturers, who were quite excited by it’s strong citrus properties.

In the late 1990’s large-scale plantations of Backhousia citriodora were established in Queensland.

Now Lemon myrtle has established itself as a wonderful culinary herb and can be used in many dishes that require a strong lemony flavour.  This herb, exciting the world over, is used in everything from creating wonderful and unique gourmet dishes, exotic teas and beautiful lemon-smelling soaps.

Lemon myrtle is the queen of the bushfood industry.  Other names for lemon myrtle are lemon scented ironwood, sweet verbena tree, lemon scented verbena and lemon scented myrtle.  I’ts grown in the subtropical rainforests of northern NSW and south east Queensland.  Lemon myrtle trees can now be found in gardens in Victoria although they do need a lot of attention, particularly in the early growing days, from the cold southern winds and frosts.  The trees have a huge attraction for gardeners who love their fragrant leaves.

Gin with Lemon Myrtle (this is a ripper!)