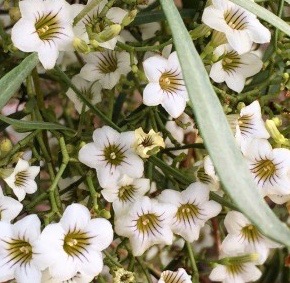 Aboriginal people have used plants both as a bushfood and bush medicine for centuries.  Scientists have shown considerable interest in this particular bush and their reports from the 19th century said that they had observed Aboriginal men chewing pituri to give wisdom, feel brave in the face of  warfare and allowed them to walk hundreds of kilometres in the desert without thinking about the need for food or water. This bush also has hallucinogenic properties.

The Pituri bush, used by the Aborigines as a bush medicine, grows to around 2.5mtrs. and is classified as a clonal shrub ie not propagated by seed.

Our early European explorers in the Simpson Desert noticed the Aborigines chewing the leaves of the Pituri and discovered that it made them happier.

The leaves were moistened with saliva, roasted over a low fire then rolled to form a plug which they would carry behind the ear and used when necessary. The dried leaves were also mixed with ash of a certain Acacia and the mixture was believed to be more potent and as the ash had an alkaline effect, it released the active alkaloids in the plant so it could be absorbed more readily.

The only member of the Burke & Wills expedition to survive, John King, admitted that it was chewing the Pituri that enabled him to survive. He said that by chewing the Pituri with the Aborigines he met, he became “perfectly indifferent to his miserable conditions”.  They called the leaves “bedgery or pedery”, Wills found them highly intoxicating

Besides being a reliever of hunger and thirst, the Pituri is also an hallucinogenic. Only the elders of a tribe were allowed to chew the leaves and this obviously helped them maintain their position within the tribe. Under the influence of Pituri, they claimed they could communicate with the spirits of their ancestors and were able to forecast the future.

The plant does not grow in many areas of Australia and appears to be common in the south-west where Spinifex grows and is rare in the east so it became an important item of trade. Another way of use was to drill a small hole in the trunk, pour in some water, plug it and the following day it would become a strong liquor.

Emus were an important source of food so leaves were placed in a small dammed-off section of a water-hole and the rest concealed by a brush fence and the emu would become intoxicated and walk around in circles which would then make them very easy prey to catch. There are conflicting reports as to whether the poisoned emu’s stomach was eaten but the records show that humans can drink the affected water without ill effects, if not immediately then within a day or so.

Other animals and birds were also captured by this method. The leaves are known to be particularly poisonous to stock and a few mouthfuls will kill an adult cow. The toxins are known to be nicotine or nor-nicotine and concentrations vary between plants. It is considered a narcotic plant in Queensland but is rarely used in the Northern Territory.

This bush reminds me of another plant found in India which has similar properties. The Trichopus zetlan-icus ssp. travancoricus belongs to the family Trichopodaceae and is a rare, herbaceous, perennial and rhizomatous wild plant which is endemic to the Agasthyar Hills of Western Ghats (Kerala). Among the “Kani” tribes of Kerala, Trichopus zeylanicus is known as “Arogyappacha”, meaning green health and vitality. The tribes claim that one can go for days without food and still remain energetic and even go on performing very vigorous physical work or exercise by eating a few of the fresh fruit of Trichopus. They also claim that to remain healthy, agile, young and resistant to various diseases or infections, one should consume the fresh fruits of “Arogyappacha” regularly!

We observed that some, though but few, held constantly in their mouths the leaves of an herb which they chewed as a European does tobacco or an East Indian Beetle. What sort of plant it was, we had not an opportunity of learning, as we never saw anything but the chaws which they took from their mouths to show us…”

Edmund Kennedy, described the Pituri leaf as a hot tasting leaf a bit like tobacco.  A report from Western Australia described the smoke from burning pituri leaves being used as an anaesthetic during surgical operations.